Shipping just £6 for up to six prints posted worldwide.

De La Warr said he was delighted to be the successful bidder. The bridge would “take pride of place on the estate close to its original position”, he said.

The original wooden structure was built from oak in 1907 to carry pedestrians, horses and carts over a river in Ashdown Forest, the setting for the Pooh stories and poems. It was replaced with a replica in 1999 after visits by thousands of people keen to recreate the famous EH Shepard drawing of Christopher Robin leaning over the railings left it worn and rickety.

The original bridge was dismantled and placed in storage. It was then later reconstructed and restored, and relocated to Kent after a private sale. 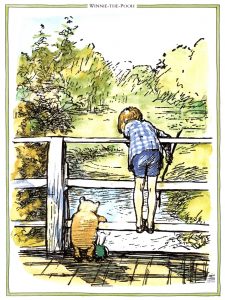 again be able to set eyes on it, although games of Poohsticks may be ruled out in order to preserve the bridge for future generations.

The new owner said: “Winnie-the-Pooh’s attraction is the innocence of a bygone age; it’s so wholesome. There’s so much badness in the world, but Winnie-the-Pooh always brings a smile to your face.”

Handcrafted with love © 2015 All rights reserved.